Ask any opera buff whether there is a fully-staged production of Wagner’s Ring Cycle in London this year, and they will confidently tell you that there isn’t one.  They will be wrong. You only need to travel to North Ealing to experience the whole great cycle, on four consecutive evenings – August 18th to 21st – with world-class singers and a peerless orchestra, in a lavish and realistic production.   St Barnabas Church PCC is indeed presenting the complete cycle from August 18th to 21st !   So if you need your annual ‘fix’ of a fully-staged Ring, there is no need to travel to Bayreuth or Seattle – come to Ealing instead.

Of course, we will be watching a fabulous recording of the cycle, emanating from the Met, New York, from about 1990, in high quality sound and vision.   Full practical details are on www.barnabites.org/wagner-ring-cycle/ .    There is no need to book tickets, each opera will cost £10, and delicious food will be provided in the intervals.  In fact, the church has been showing operas now for 5 years, with about 55 performances covering most of the core opera repertoire.   The operas have given huge pleasure to many local people, particularly the elderly who would be unlikely to travel to Covent Garden, the Coliseum or Glyndebourne, and have raised funds for the church.  The format really does work supremely well in practice.

I am a huge fan of ‘canned opera’.   The advantages over the ‘live’ experience are self-evident and too numerous to list, but include better singing, better vision, (usually) better sound, more ease in reading surtitles and no risk of singers cancelling because of a sore throat !  These are discussed in detail in a previous blog post http://www.hughmather.uk/wordpress/the-advantages-of-home-opera/ .   I accept that there can be an extra ‘frisson’ of excitement with a live performance, but this usually turns into a massive frisson of irritation with modern productions.    Watching ‘canned opera’ at home on one’s own can be a solitary and lonely experience, whereas being part of an audience experiencing an opera together, as at St Barnabas, is enormously enjoyable.

All opera houses regard staging the Ring as their ultimate challenge –so St Barnabas PCC thought that it would take up this challenge as well !  It is a gamble, since many opera-lovers find Wagner very difficult, as do a surprising number of musicians, so we may struggle to find an audience.  I am always amazed that so few young instrumentalists, for example, seem to know any opera in general, and Wagner in particular.   And various friends who are superb musicians, particular (it seems) those with a choral background, seem allergic to what they regard as ‘overblown’, ‘emotionally incontinent’ music !   Perhaps it depends on one’s psychological make-up.   I think the excessive vibrato of many Wagner singers is a potent factor in their distaste – this is indeed a problem and needs its own blog post.   And it takes a certain amount of work to absorb the leitmotifs and the convoluted story of the cycle.   I was given the Solti set of LPs as a Christmas present by my wife around 1980, and spent whole weekends listening the music while following the turgid libretto, line by line.  Now it’s much easier to absorb the operas, watching them on DVDs instead.   Robin Duval is giving an illustrated lecture on the Ring Cycle on the preceding Sunday evening at 7 pm to help people who are new to the Ring.   He is considerable expert on Wagner, and this should be an excellent introduction.   More details again are on www.barnabites.org/wagner-ring-cycle/ .

The rewards are indeed great.  One can’t be neutral about Wagner – either it leaves you cold, or it completely knocks you over !  Your first Wagner ‘trip’ – particularly Tristan, Walküre or Götterdämmerung – can be a ‘rite-of-passage’ experience – a veritable life-event.     The cumulative emotional impact can be overwhelming.  It really does, like Heineken, reach parts which other (composers) don’t reach, although I don’t think I should be too specific as to what they might be.  One is left in awe of the genius of Wagner himself – regardless of his considerable personal failings.

So come along and enjoy Wagner’s Ring Cycle in August, whether you know the cycle intimately or not.  I am hoping that at least some people might have their ‘rite-of-passage’ experience in St Barnabas Hall in mid-August !   If you are already a Wagner fan, do come along – and please tell your friends.  It will be a mind-blowing experience, and certainly the cheapest Ring Cycle you will ever experience.  Come and be part of this special occasion.

Over the past decade, at least 318 pianists, listed here, have played in my 1000 concerts at St Mary’s Perivale and St Barnabas Ealing.   Some are no longer around, and many play chamber music or accompany singers, rather than give solo recitals, but there are at least 70-100 pianists who could, and would, present an excellent solo piano recital date at one of my venues.  Although I run about 100 concerts a year, my current concert series aim to provide a balanced programme of solo piano, duos, piano trios and larger ensembles, wind music and vocal items.   This variety is essential for a general audience, and piano recitals are perhaps less popular than, say, piano trios.   So in practice I can only provide recital opportunities for about 20-25 pianists per year.  This is clearly insufficient.  Furthermore, some of our pianist have given regular recitals for several years, and built up a considerable local following, including Viv McLean, Ashley Fripp, Jayson Gillham, Mengyang Pan and Mishka Rushdie Momen, and are invited back.  Thus it is currently difficult to give recital opportunities to more than a handful of ‘new’ pianists each year.  Yet the number of outstanding young pianists based in London continues to enlarge inexorably, with exciting new ‘kids on the block’.  These include the recent influx of outstanding pianists from the former Soviet Union, who have studied in Moscow and now are studying in London, and many from other parts of the world, although disappointingly few are from the UK.   I receive at least 100 emails per year from ‘new’ pianists seeking a recital.   All need, and deserve, regular performing opportunities, as a crucial part of their development as pianists.  Regardless of talent, there is no substitute for wide concert experience, with different audiences, pianos and concert conditions.  So this large pool of pianists are all competing for the limited number of recital slots available in and around London.  From my personal experience, all are charming young people who are following a very difficult career path, and they deserve our help.

Geoff Cox, a close friend who is also interested in helping young pianists, has produced a fascinating and invaluable survey of London concert venues, which I can heartily recommend, particularly since he has put my two venues at the  top of his list !   On the face of it, there seems an abundance of recital opportunities.   In practice, there are problems with many of the venues.   Firstly, the standard of pianos is widely variable.  Many churches were typically bequeathed a grand piano many decades ago – usually around 1950 – which is now in a mediocre state, or worse.  Churches don’t usually have the funds to re-condition pianos, and a ‘beat-up’ old Bechstein will still be a ‘beat-up’ old Bechstein, even after restoration.  The piano may supposedly be tuned ‘regularly’ – which may mean twice a year !   In reality, remarkably few venues have pianos which are good enough to enable exceptional pianists to show their true worth.  So much of fine piano playing is about sound quality, yet this is frankly impossible to realize on the indifferent instruments available in many venues.   String players don’t know how lucky they are !  Secondly, the number of recital opportunities at each venue is usually small.  Many well-established music clubs have about 8-10 concerts per year, but may devote perhaps only 2 or 3 to solo piano recitals.   All the amateur orchestras similarly have perhaps 2 piano concertos per season, so concerto experience is very difficult to find.  Few concert series are devoted solely to piano recitals. Thirdly, the arrangements for paying musicians vary markedly, as noted in a previous post.   Some of the most prestigious lunchtime recital venues in Central London, and some well-known private venues, offer no payment whatsoever, despite having retiring collections or charging admission.   This is blatantly indefensible, whatever the charitable aims of the organisations hosting the events.  Fourthly, the size and nature of the audiences are very variable.  I have played lunchtime recitals in Central London churches with about 6 in the audience – mainly homeless people, asleep in the back row of the pews.  Conversely, some up-market music clubs have a reasonable audience, but may comprise people who have come along for social rather than musical reasons, waiting for the drink or drinks in the interval, and may greet an outstanding performance with heart-sinking indifference.  Enthusiastic and knowledgeable audiences are a rarity. 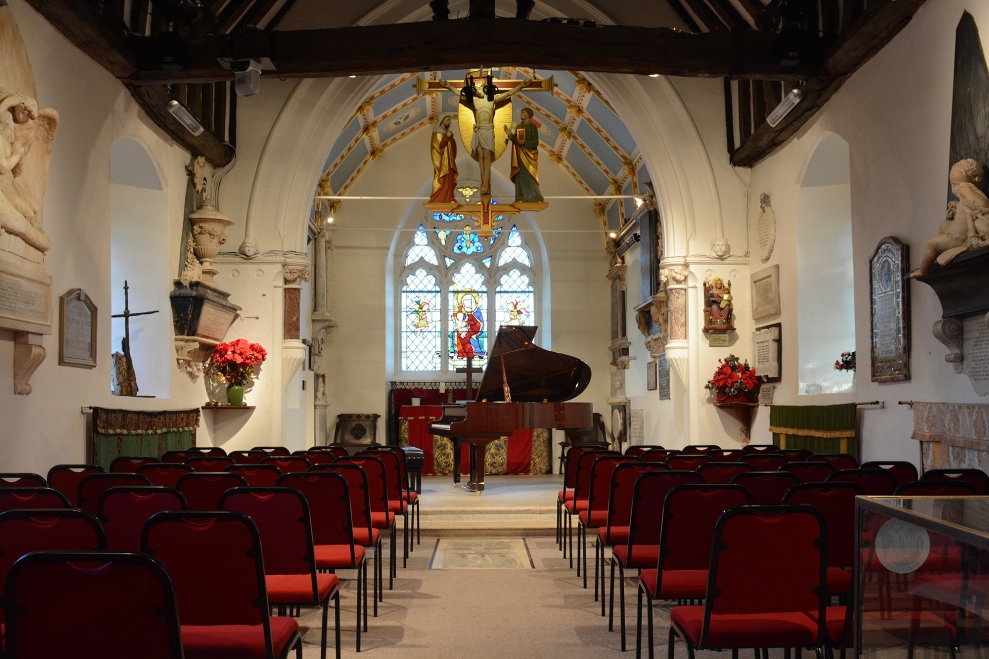 So, looking through Geoff Cox’s list, there are relatively few venues which offer the golden combination of a good piano, a reasonable and keen audience, some sort of payment and the potential to host a significant number of piano recitals.  Yet there are so many wonderful young pianists based in London seeking more performing experience and exposure.In response to this imbalance, we are setting up a new Tuesday Afternoon Piano Recital at St Mary’s Perivale in July.   These will be at 2 pm, last one hour, and will feature carefully selected, outstanding pianists, who will receive £100 cash and a high-quality recording.   The first four concerts are as follows : July 5th Dinara Klinton ;  July 12th Tamila Salimdjanova ; July 19th Ashley Fripp ; July 26th Mark Viner.   Full details of their recital programmes are here.   If it is a success, we will continue the series from September onwards, throughout the year.   Hopefully this will provide about 40 pianists with a recital opportunity every year.   However, we do need to attract a quorum – perhaps 20-30 – of piano enthusiasts who enjoy listening to exceptional piano-playing, in comfortable and beautiful surroundings, with other like-minded piano fans.   It is easy to travel out of London to St Mary’s Perivale on Western Avenue out of the rush-hour, and parking is free and readily available, and the concerts will be free admission with a retiring collection.   So please help spread the word about our new piano series !  We hope that it will provide a invaluable service to many of the best young pianists based around London.  We owe it to them to make this new initiative a success.